Sri Ramar Pattabhishekam ( Original Tanjore painting Digital image) This original painting is 102 years old. Rama along with Sita and Laxman returned to Ayodhya in the Pushpak Viman of Ravana. The whole of Ayodhya welcomed Rama by lighting lamps all over. Diwali is celebrated, according to one legend, on the day Rama was crowned after his return to Ayodhya with Sita. Diwali is the most important festival of Vaishnavites. The coronation of Rama is referred as Sri Rama Pattabhishekam.  Rama's unquestioning obedience to his father's wishes, his moral uprightness in war, his deference to the wishes of his people, his generosity in the face of personal loss and his marital fidelity has made him Vishnu's most august and venerable incarnation.

Sri Ramar Pattabhishekam was created by artist RAGUNATH VENKATRAMAN in 1890. This art piece , which is part of the V.RAGUNATH portfolio, is a Glass artwork. The style of this artwork is best described as Symbolism. The genre portrayed in this piece of art is Historical. The artwork was created in Glass. The size of the original art is 24 (inches) H x 18 (inches) W.
Words which artist RAGUNATH VENKATRAMAN feels best describe this work of art are: Sri Ramar Pattabhishekam. 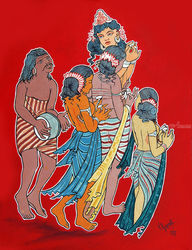 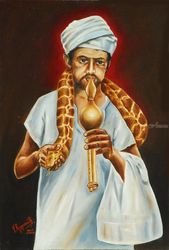 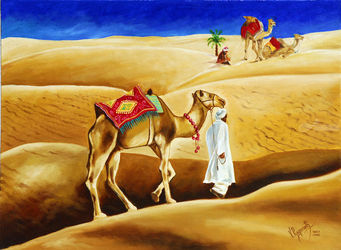