"Space Garnet" - this title of the picture carries a deep philosophical meaning. The Russian historical context is contained in the details of the work: "The watch with 03:57 and 04:04 is a mournful symbol of the beginning of the war of Nazi Germany against the USSR. It was a moment of truth - our country will remain free and independent, whether millions of lives of people throughout the country will be saved or 90% of people will be destroyed, and the rest turned into slaves of Nazism.This time is not in vain called the Great Patriotic War. But the Victory did not happen by itself. Historical continuity in military affairs has played a huge role. Despite the Stalinist repressions of the 30s, talented and educated officers and generals who were trained at the General Staff of the Tsar's army remained in the ranks of the USSR armed forces - this continuity is reflected in the figure of a girl in a general's uniform, which is still used in the Russian Army. The image of a girl in this military uniform symbolizes Russia, as the core of the victories of Russian soldiers in two World Wars against Germany (reflected in two episodes of the air battle of Russian aviation in 1914 - on the right and the battle of a Soviet fighter with a German aircraft - on the left). Two naked ballerinas dancing on luxurious columns and seemingly freed from captivity by the golden eggs of Faberge are an image of freedom and creativity, uniting the pre-revolutionary and modern cultures of Russia. A surreal fragment of the painting - a red retro car with modern superjet elements - with wings and turbines, symbolizes the desire and dream of rapid technological progress. The roof of the car is made in the form of a chessboard - just as the life of a person and states is always a complex and multi-pass game. And finally - the fruits of the pomegranate: this fruit has always been considered a symbol of the unity and prosperity of all peoples. Combining them on the basis of mutual respect and mutual assistance. Understanding of people as inhabitants of our One House - Planet Earth. 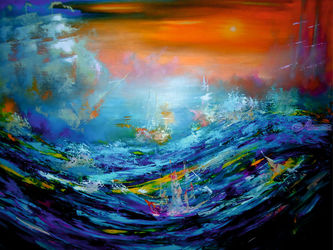 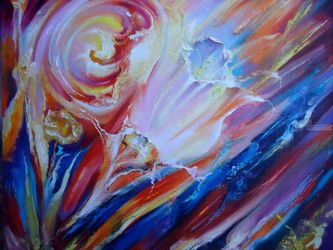 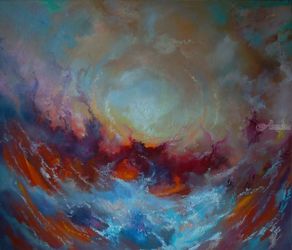