NOSTALGIA FOR THE HOMELAND was created by artist Yuliya Zelinskaya in 2018. This art piece is a Paintings artwork. The style of this artwork is best described as Fine Art, Impressionism. The genre portrayed in this piece of art is Celestial / Space. The artwork was created in Oil. The size of the original art is 70 (inches) H x 80 (inches) W.
Words which artist Yuliya Zelinskaya feels best describe this work of art are: space, abstraction. 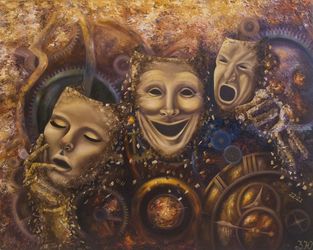 And this, too, shall pass away